Take Aaron with you. 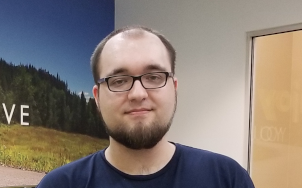 Aaron has worked for SoftSource since 2019.

Bachelor of Science in Computer Science
University of Portland

I’ve been playing video games for as long as I remember. After expressing interest to my dad in how video games were made, he set me up on the family Windows 98 computer with a C compiler, Notepad, and some tutorials he found online and printed out. The programs I was making at the time were nothing special, even silly at times, but I was hooked on the feeling of planning, designing, and seeing my own creations come to life. I still remember nervously asking my parents if I could kick them off the internet on their own computers so I could spend some more time looking for tutorial resources on our one-computer, dial-up internet connection!

I often think back to a group project I was on for a Game Design course in university. Our requirements were to design and build a three-dimensional, arcade-style game, but we were having a lot of trouble coming up with an interesting idea. We had a ship traveling down a river, trying to avoid obstacles along the way, but we had spent a lot of long nights trying to figure out how to make the idea actually fun. And then, one day, a simple idea came to us – what if the ship bounced off obstacles at a speed faster than it collided with? – and then realized this led to the possibility of strategically planning a route for your ship to pinball down the river as fast as possible. It was silly, but it was a lot of fun, and with this change came renewed passion for the project. At the public end-of-semester showcase, our game was one of the most popular exhibits, and the frantic banjo music of our game was echoing through the whole hall for the entire length of the event. Sometimes it just takes one great idea to turn things around!

It’s difficult to answer because I’ve spent my entire life around computers, but I could see myself working in media localization. Many of my favorite projects involved handcrafting experiences while respecting the work of those that came before.

My career has continuously reinforced the idea that empathy must be exercised when making *any* decision. Consideration for your users, your teammates, and even yourself is extremely important, or you will end up breeding distrust.

You’ll probably find me playing board and card games with friends and family, or listening to music while solving pencil-and-paper logic puzzles.

I like to speedrun video games! I play video games from start to finish as fast as possible and livestream myself doing so online.