Take Jason with you. 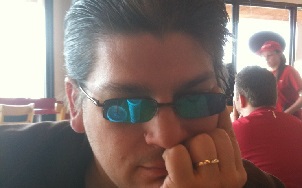 Jason started at SoftSource Consulting in 2014.

My first foray into development was back in 1982-ish when my dad brought home an Apple ][ and proceeded to heavily modify it (he was a tech geek with degrees in physics and electrical engineering) into the rough equivalent of an Apple ][+. The “rough” part was that it didn’t boot up to the usual Applesoft prompt, but straight into the machine/assembler prompt. That ended up meaning I did as much 6502 assembler coding as I did Applesoft BASIC. A multilingual skill that I think has paid off in the long run. The real joy in those early days came from the ability to make a machine conform to my will… even if I didn’t really know what I wanted it to do. Sometimes, happy accidents make for the most fun.

These days, my career has evolved me into a real jack-of-all-trades, but the user-interface is where my heart lies. The technologies underlying the interface come and go at such a rapid pace that I don’t know that I’d ever tie myself down to a single stack (or even thick- vs thin-client), but taking the concrete building-blocks of user interaction and blending them with the “art of usability” is certainly where my passion lies.

My greatest personal success came from a failure. Co-owning my own “computer game” company, which did run successfully for over three years, was an incredible flood of information, ideas, processes and experiences that coasting along in a pre-established success story could never have provided.

In the world of software development, much like the zombie apocalypse, Movement is Life. Stagnation will kill your career. If you aren’t constantly probing, searching, experimenting and learning then you’re actually going backward.

At roughly the same time I discovered computers I also discovered role-playing and advanced board games (the kinds that blow Monopoly away, with hundreds of pieces and 60-page rulebooks). I always knew that I’d grow up to work in one of those fields. And, for a few years, I actually worked in both at the same time.

When the power goes out I am fully devoted to playing games. Anything that involves a dose of strategy or a splash of social connection is enough to draw my interest in for hours at a time. It’s the kind of obsession that leaves me hoping for the occasional black-out (even though that makes it hard to see the pieces).

Ice hockey is the greatest sport of all time! If I had committed to the Jock Life Path back in grade school (rather than Computer Nerd) I would have made it my mission in life to make the NHL. Let’s Go, Avalanche!!