Take Jeffrey with you. 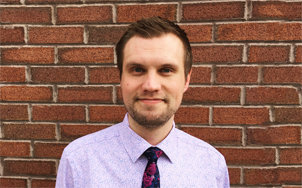 Jeffrey has worked for SoftSource since 2019.

My VERY first programming experience came from playing around with QBasic on an old Windows machine when I was around 10. I created a program that asked the user to input their age and if they were over 40, an old-person alarm would sound. My mother was less than amused. I found my early romp in programming to be a lot of fun and I even purchased a Visual Basic programming manual from a garage sale, but I didn’t feel like I had any of the resources I needed to make any actual progress, so I dropped it all together until I discovered the joys of web development in 2010…

I had the opportunity to rebuild TimeClick, a time tracking software for small businesses. I was working as a support technician at TimeClick and I was frustrated by the various limitations of the out-dated product (it had originally been created in the 90s and was written in COBOL). A coworker and I created a product demo and approached the company owner about the possibility of recoding TimeClick. He agreed and we began rebuilding it completely from the ground up. After a few months, my coworker left to pursue other opportunities and I became the sole developer for the project. I got to wear all the hats and the buck stopped with me. It was both terrifying and exhilarating and I learned SO much.

I didn’t actually think to pursue technology professionally until I had already finished my first Bachelor’s degree in English, so I imagine I’d be an editor right about now.

That tradeoffs exist for EVERY decision that you make and that it’s important to use the right tool for every job.

I love making things, whether it’s tinkering with a model house, creating a taxidermied werewolf head for a Halloween decoration, or reupholstering thrift shop furniture. Some day I hope to have a full on workshop I can play around in (for now, my incredibly patient wife just asks that I clean up after myself).

I’m madly in love with my little family (I have an awesome wife and two amazing sons). And I love the concepts of writing poetry and drawing, but I can never seem to actually sit down and work on either one…